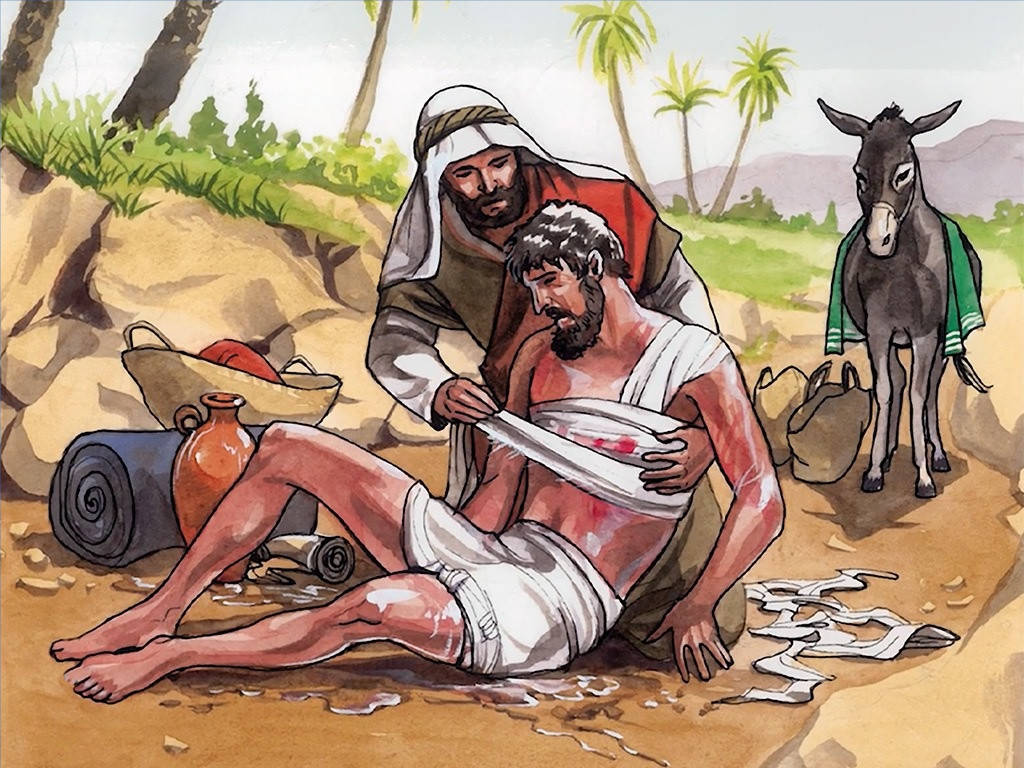 A couple of weeks ago, I preached on the Parable of the Good Samaritan (Luke 10:25-37). I discussed some ideas I had about the parable with some clergy friends beforehand, and it turns out that the parable is very widely misunderstood.

I’d like to suggest that we can (and should) read it on three different levels.

On the first level, it’s a story about how we should help other people. It’s striking that the first two people to walk by, the priest and the Levite, had just about every excuse that we still trot out today not to help. Too busy, want to see family, certainly dangerous to help, might even be illegal, they’d already done enough to serve God, not doing any harm.

The Samaritan even had another excuse, didn’t he? This guy he saw lying on the floor was his natural enemy. (Samaria was a country neighbouring Galilee and Judea, and there was 600 years of bad blood between them and Israel.) But God says we should help anyone, anyone who is in need, when we have the opportunity.

I don’t mean helping scam artists pretending to be homeless in the city centre; and I don’t mean giving money when actually practical support or food is a lot more use. But Jesus says love your neighbour as yourself, and that means anyone.

But have you ever noticed that the parable isn’t the way round we’d expect? We’d expect it to be the story of the nice Jewish chap, helping even the nasty Samaritan. But it wasn’t. The real hero in the story is the person the hearers would have hated. They thought the only good Samaritan was a dead Samaritan.

This story is great at cutting through prejudice. Because it isn’t just about who you would help. The characters we’re meant to identify with either need help or do nothing. It’s the character we’re meant to hate who helps. So this says to the Ku Klux Klan in America – “Imagine you are dying by the side of the road and a black guy helps you. How do you respond?” It asks folk in our society – imagine that a Muslim immigrant or a Trump supporter or a member of those people you just don’t speak to saves your life. How do you respond? Live like that.

I wonder how the parable of the Good Samaritan makes you feel. If I’ve got it right, it’s probably meant to make you feel a bit guilty.

Maybe you’ve realised what it means – that we should love others the way we’d want to be loved in their situations, even if it means helping folk we don’t like, even if it’s inconvenient. Maybe you’re starting to realise that nothing you can do will ever be enough to fulfil Jesus’ command to love your neighbour as yourself.

I think that’s right, and that’s the point. Because the lawyer Jesus told the story to was someone who was looking to prove that he was in the right. He asked “What must I do to inherit eternal life?” He thought he could be good enough. He wanted to justify himself.

And Jesus tells him a story that shows that he never can be. Of course we should try. Of course we can seek to love others. But we can never get to be good enough for God that way. When it comes to our abilities to get to God, we’re all like that guy bleeding out by the side of the road. We need someone to come along and rescue us. Someone who is despised and rejected by mankind, a man of suffering and familiar with pain, who can pick us up, bandage our wounds, and bring us safely home.

And that is exactly what we have in Jesus. We were naturally his enemies because of the way that we think and talk and act. He made the effort to come our way, he came down to earth as a man. He saw us in need, he paid the price to rescue us, and to care for us, and he offers to bring us safely home.

Jesus says “love one another as I have loved you.”

(Image above was from Free Bible Images.)

View all posts by johnallister

One thought on “The Good Samaritan”